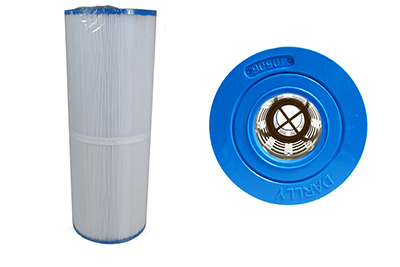 In accordance with Health and Safety Guidelines (HSG282), a domestic hot tub used in rented accommodation including holiday lets, homes, parks, lodges, chalets, cottages, caravans, etc should be disinfected using Bromine or Chlorine through the use of an inline continuous disinfection feeder.

This filter has a central divider for the SaniStream dosing dispenser to be inserted and kept in position.

The design allows easy access for inspection, refill or replacement while keeping it locked away out of sight of consumers using the spa.

Please Note: The SaniStream dispenser is not included with the filter and must be purchased separately here.

Please note: Although the Sanistream dispenser is designed to be used with either Chlorine and Bromine tablets, you may find Chlorine tablets to dissolve at a much quicker rate. To try to avoid this happening ensure your filtration cycle is reduced to no more than 4 hours per 24 hours.

Also, some further information to bear in mind is Chlorine is acidic and lowers the Ph value of the water. When the pH value of the water gets low it has a multiplying effect on the acidity and can have a melting effect on the Polyurethane plastic in the top and base of the filter. Therefore it is important you balance all your chemicals correctly and test levels regularly.

This filter is known to fit some / all spa models from the following manufacturers. Always compare the dimensions of your filter against the dimensions listed.

Please Note: If your existing filter fits over a centre spindle in your spa, you will not be able to use this SaniStream compatible filter. You will require the standard version of the PRB50 IN Filter.